Since the beginning of our IFundWomen campaign, the following has been accomplished: 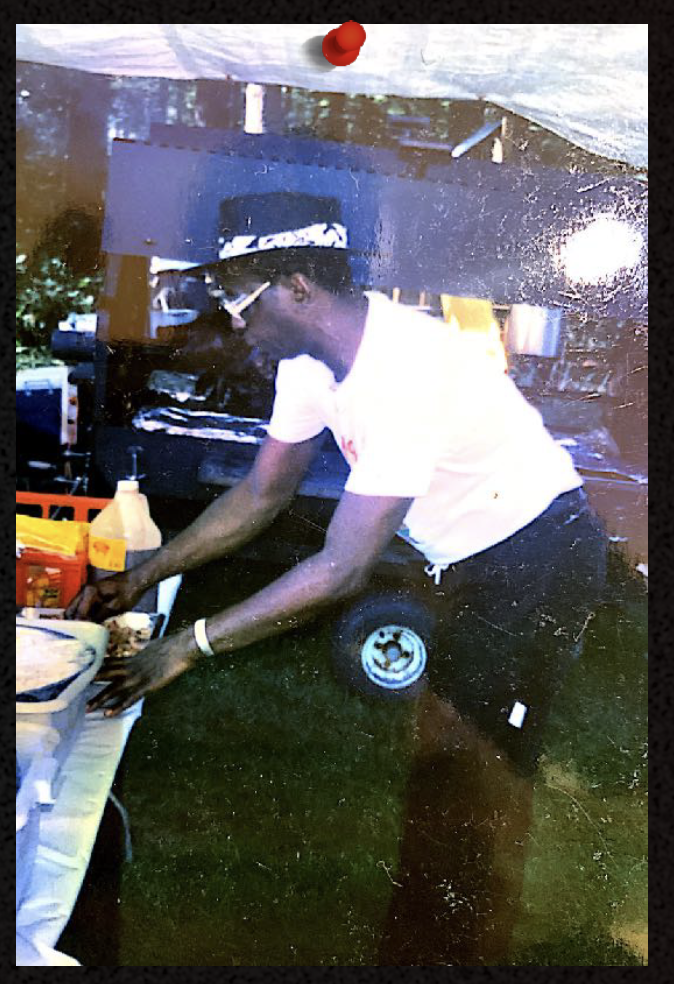 Given the multitude of layers and open-ended conclusions surrounding Izzy’s death, my goal is to tell this story in a multi-part documentary series. The story requires that we all understand the world from which Izzy came--his life, his history, his missteps, his passion for barbecue. The series will take the audience through the town of Glens Falls, New York and how as a whole, we let Izzy down. We will hear from his loved ones, his friends, and maybe even known enemies, and delve into the moments leading up to his death. For fourteen months, Izzy had been reported missing by his family. He was later found hanging from a thirty-foot tree in the middle of the woods. Shortly after he was found, investigators closed the file on the details of Izzy’s death as they deemed it a suicide. But Izzy’s case still remains unsolved in the hearts and minds of his family and close friends. No plausible truth has emerged since his death in 2006, which has only deepened the pain of loss and injustice that is felt within the family. And with the sordid history of black men being hanged in America, there is no way we can accept this as the final truth. Lynchings are an egregious part of American history that almost always bears no consequence; so given this truth, Strange Bird is an examination of what really happened to Izzy. 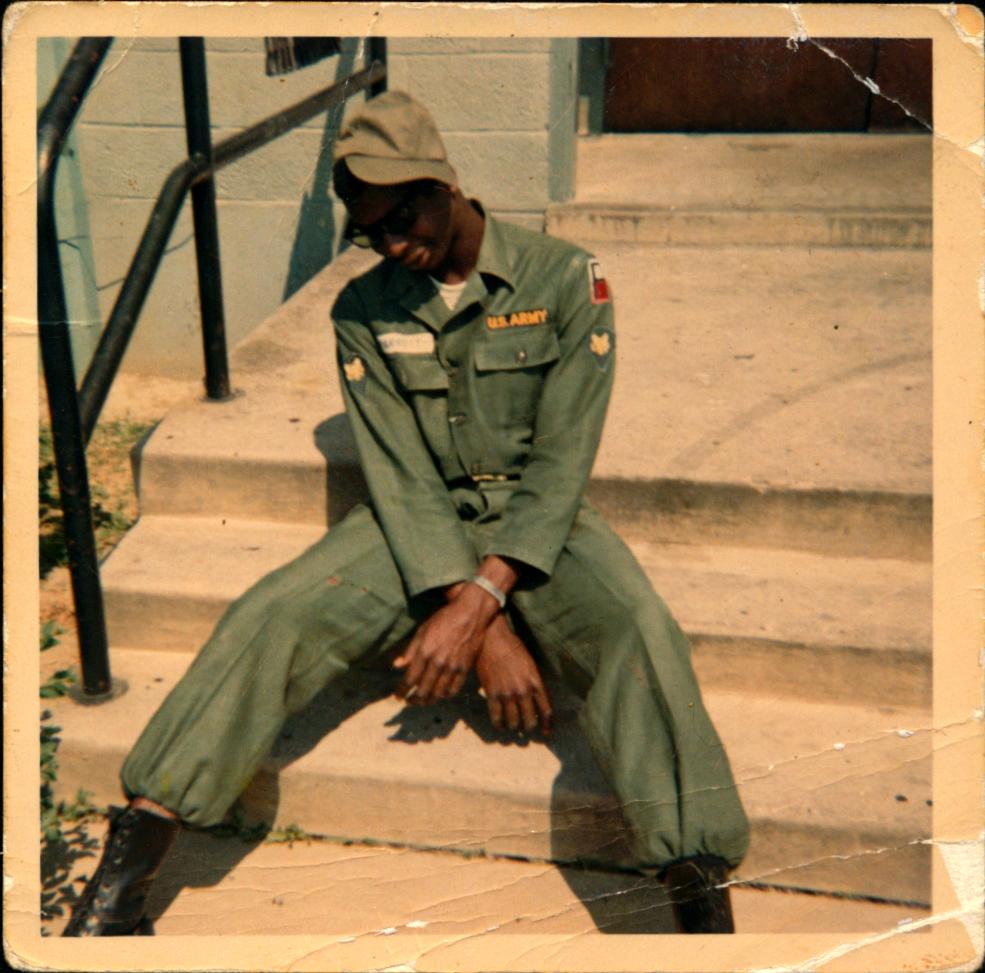 A small team of archeologists digs test pits on the site of a planned industrial park in Glens Falls, NY.  It's their first day on the job and they want to ensure no Native American artifacts will be destroyed during construction. A team member comes across a large bone. He pokes at it with a shovel and speculates it might be a dead animal. Another finds a tattered leather wallet nearby and turns it into the local fire station. He heads to lunch thinking nothing more of his discovery.

Meanwhile, a firefighter phones police about the wallet found, and a responding patrolman recognizes the name: it belongs to a 61-year-old local man named Izell “Izzy” Parrott, a local barbecue chef. Police have the archeologists lead them into the woods where the wallet was found. Searching the ground for additional clues, they find more bones--one protruding from a boot. Suddenly, an officer cranes his neck and shouts, “Oh God, look up!” There, thirty feet off the ground, are human remains hanging from a nylon rope tied to a branch of a pitch pine tree. A Carhartt jacket hangs off the torso--another clue that body hanging is Izzy. This was his signature jacket. His remains were transported to Albany Medical for an autopsy, and after a two-hour examination, his official cause of death was ruled “asphyxia due to hanging.” The report states that Izzy died within minutes, and his cause of death was suicide. 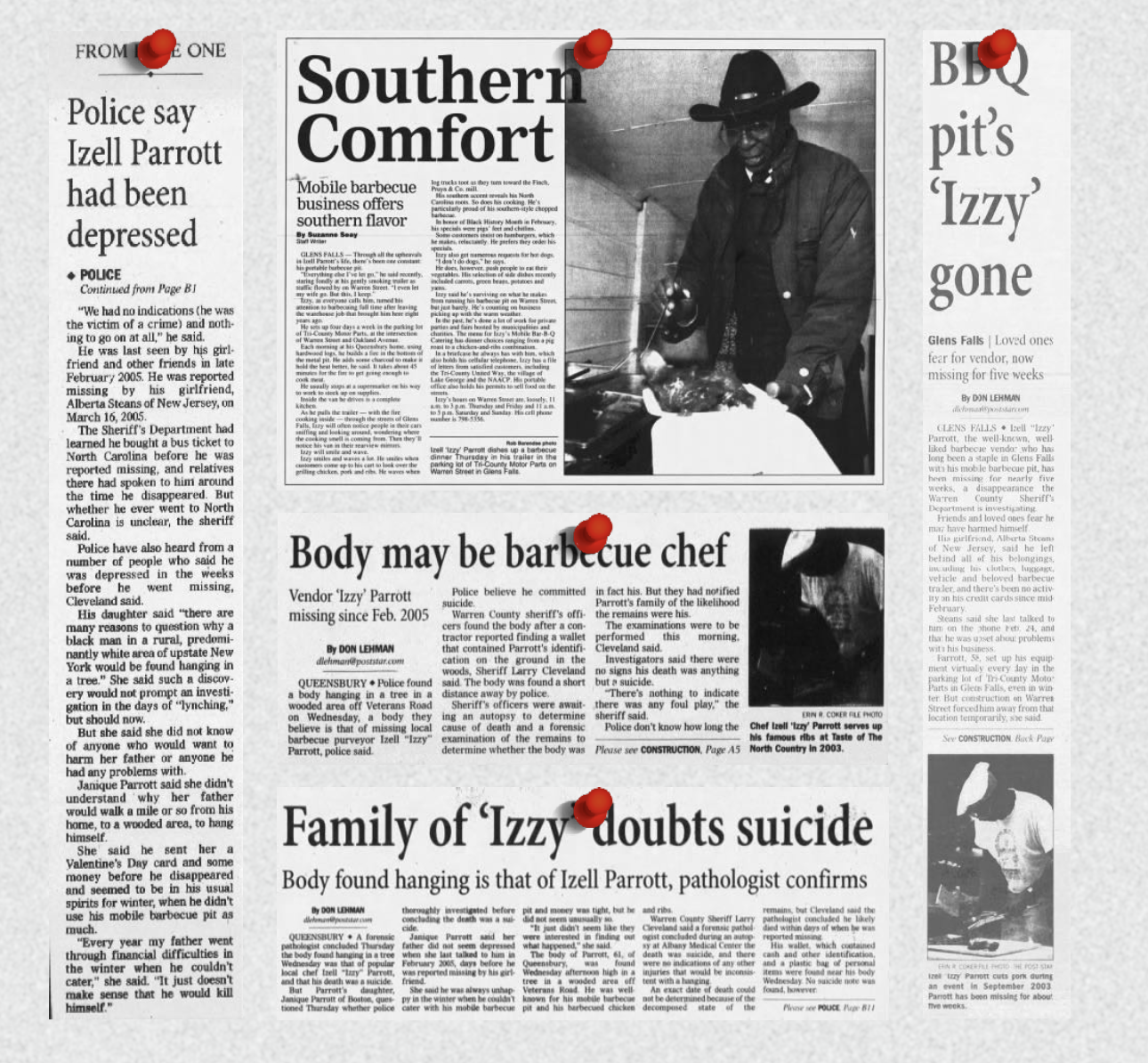 Four days later, we learn that Izzy had complained to a friend about “racially related problems” included the word “nigger” spray-painted on a tree in his backyard. With this, and so many other examples of tension and threatening behavior that permeated throughout parts of Izzy’s life, we are forced to question his true cause of death. Strange Bird investigates and uncovers new evidence to bring us to the ultimate goal of justice. 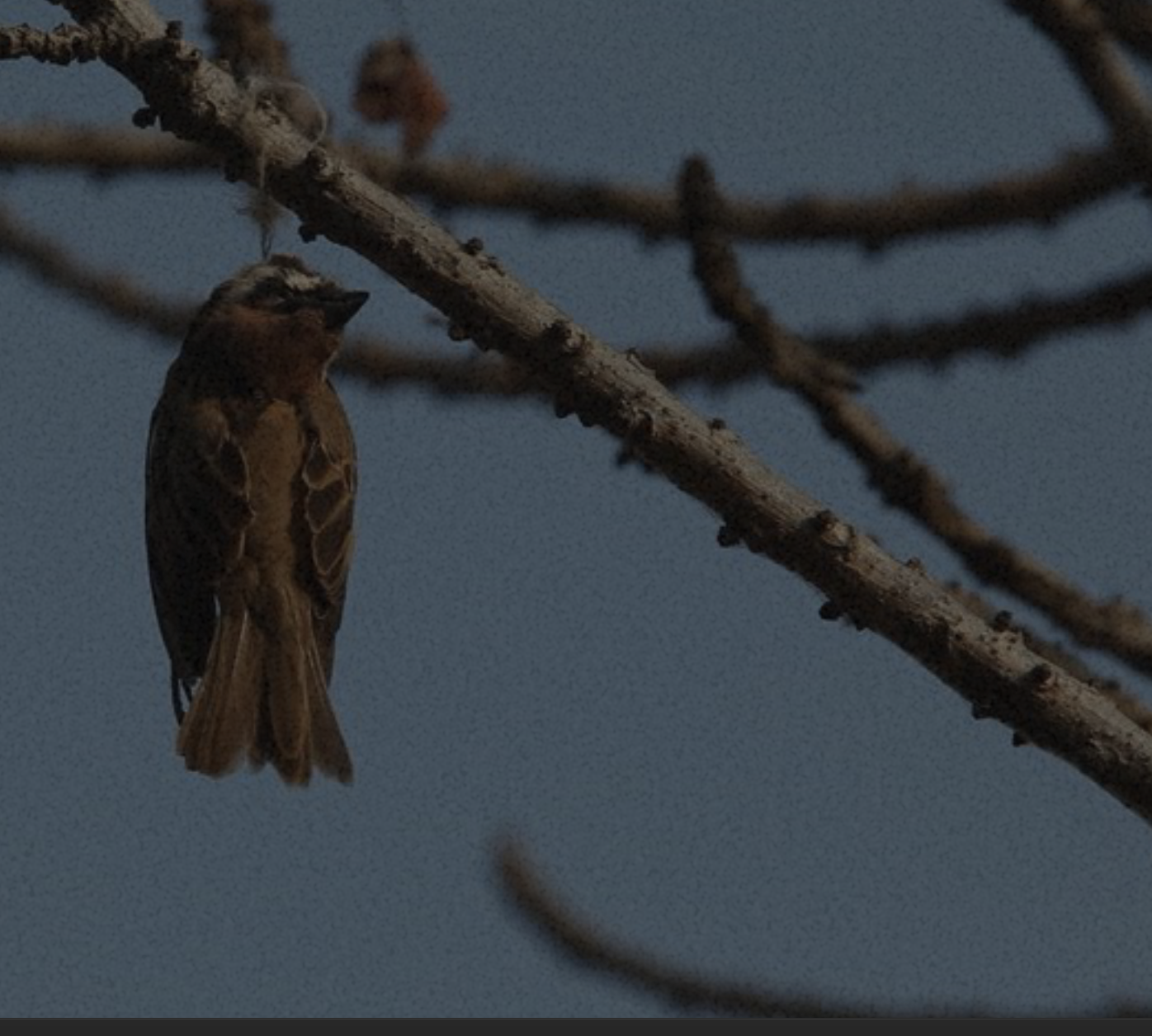 The series explores the suicide ruling and asks whether or not this is something Izzy would have really done. He was a complicated man with an uncertain future before his disappearance, but would taking his life be his only way out? Or, was he killed? Did the death investigation go far enough? Was Izzy killed over a dispute? Were there suspects the police failed to identify? Is this a hate crime? How does a 250-pound man climb a thirty-foot tall tree in the middle of winter in upstate New York  to kill himself? Why?

ABOUT THE FILMMAKER & ERNEST MEDIA 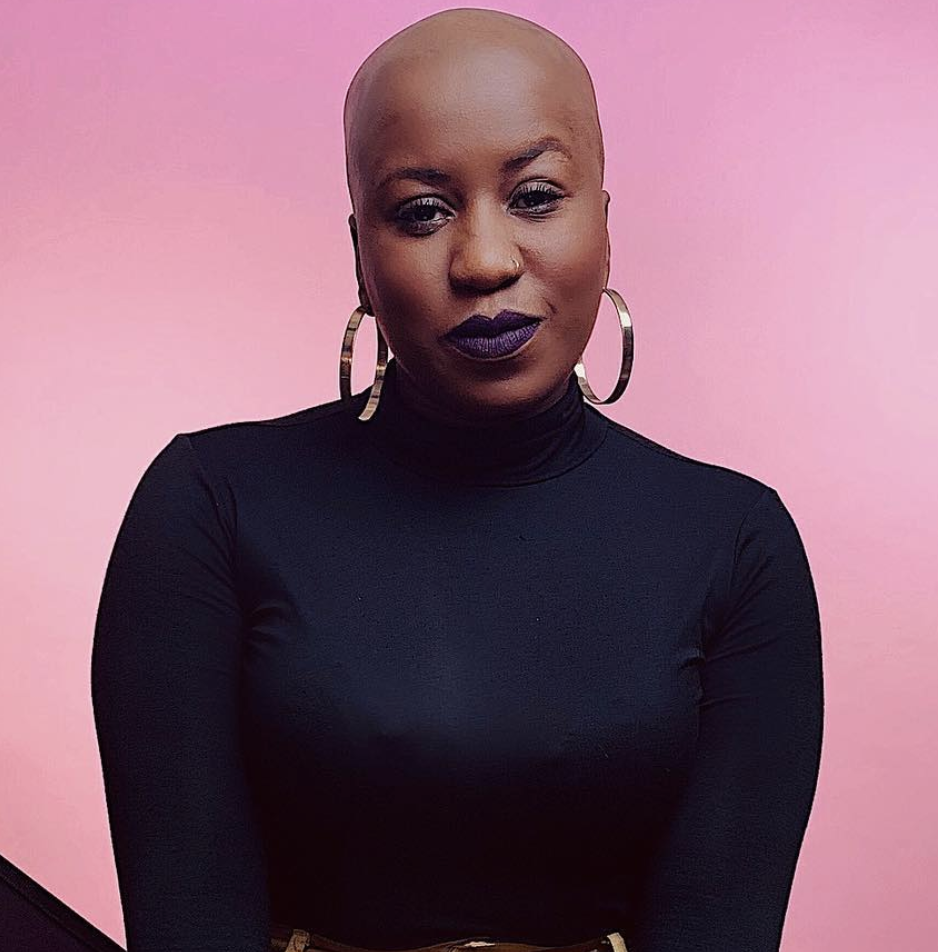 I am a filmmaker and producer. I grew up in Glens Falls, and through my own experiences, I understand how Izzy’s death can be interpreted differently. This documentary series tests my allegiances, but I am committed to searching for the truth. I was a production manager on two of Joe Berlinger’s recent criminal justice series: Gone: The Forgotten Women of Ohio and Killing Richard Glossip. I produced branded content for global brands like Under Armour and have prioritized telling stories about underrepresented groups. I am the CEO of Ernest Media and Good End. Ernest Media tells stories, Good End works with freelancers to craft the strategy and distribution plan. Ernest Media is a production company that collaborates with underserved and unrepresented people to tell their stories. Our mission is to bring awareness to unsung heroes, injustices, record stories, and allow storytelling to mend and heal.

Since this project’s conception about two years ago, I have worked independently to capture footage, lead interviews with Izzy’s family and key members of the Glens Falls community, as well as piece the details all together. I am proud of the trailer, and am eager to begin the process of shooting the series.  But I need your help to tell this story the right way. To do so, I need to secure a dedicated researcher to present factual information, a private investigator to weed out all falsehoods surrounding Izzy’s life and death as well as investigate the deaths of other black men who have been found hanging from trees in the Glens Fall area in recent years. I also need to secure the appropriate licensing and archival footage to further illustrate the blood stain of lynchings of Black Americans throughout history, and also require security to keep myself and the crew safe.

It is also important that the aesthetic of the series aligns with the details of the project. To tell a visually engaging story, I also need full access to top tier camera and audio equipment. Proper distribution of this film requires that I follow visual guidelines from studios and networks where I ultimately want this series to find a home. I’d also like to support a crew by providing all their necessities including transportation, lodging and food.

Your money will help to support all of these needs.

Our fundraising short goal is to raise $50,000 by Nov 30, 2020. We've decided to go with this platform for its reputability and ease in partnership with ifundwomen.org . In addition to cash donations, we are looking for resources, support, prayers and all around good vibes to help get this story told.  Please help us share! ​

The total amount to finish the multi-part series is approximately $650k +.

If you have any questions, or if you would like to get involved, do not hesitate to  contact me at izellparrottdoc@gmail.com .